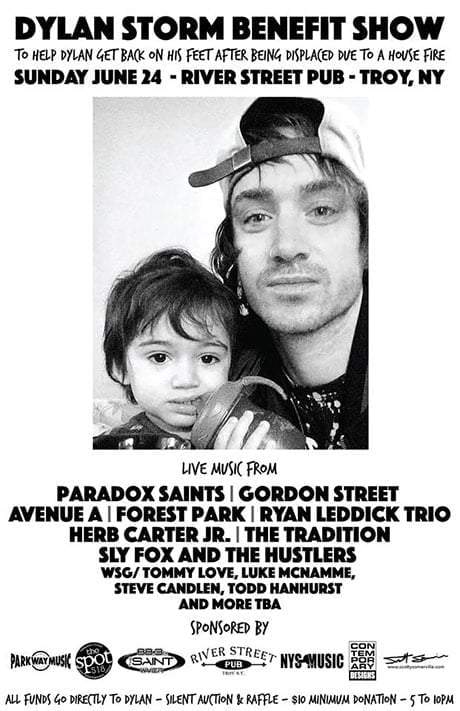 He has one pair of shoes, a three-year-old son, Jack, and they’re both currently homeless.

A couple of weeks ago, Dylan Storm James Wilcox, Sly Fox’s right hand man and bass player in the blues-rock band Sly Fox & the Hustlers suffered an electrical fire in the basement of his apartment house. “He was left with a few clothes, but everything else went up,” says Sly. Dylan and Jack are temporarily staying with Sly while they look for new digs.

Expect some late surprises, too. The announced acts are only those who responded to Sly’s request on the first day he cast his net. Sly is one of the most plugged in music men in the area. Not only has his band opened for Kenny Wayne Shepherd, Robin Trower and Blues Traveler locally, but they’ve just come off gigs at Americade in Lake George, Dad Fest in Albany’s Washington Park and are scheduled to headline Troy’s Pig Out next month. Sly also books Troy’s Dinosaur Bar-B-Que and performs multiple functions at Putnam Place in Saratoga Springs.

You can GO HERE if you can’t make it to Sunday’s benefit concert but would still like to make a donation.

A little bit about the bands:

SLY FOX & THE HUSTLERS are a regional band with the rock energy of AC/DC, the blues grit of Howlin’ Wolf and a creative spark that that makes their originals as credible as their covers. The band has released two full-length albums, a live EP Live at the Egg, and they’re headed back into the studio to record in August. They’re one of my favorite local bands. For Sunday night’s finale, they’ll be joined by local legends Tommy Love (who at this point in time does Mick Jagger better than Mick Jagger) and sax player Luke McNamee of Blue Hand Luke (whose pedigree includes woodshedding with Austin’s finest). Also guesting will be Todd Hanhurst.

PARADOX SAINTS, a Saratoga neo-psychedelic band formed in 2012, are recent winners of the Shake the Lake for Vets Sake Battle of the Bands at King Neptune’s Pub in Lake George. Their influences range from The Kinks to the Jesus and Mary Chain.

GORDON STREET, a Schenectady rock and roll band together for about a decade, describe their music as “a mix of Beatle-esque pop hooks, jam band-influenced tangents and heavy guitar riffs, all to danceable rhythms.” Their songs “Right as Rain” and “King of Hearts” were named part of WEXT’s Local 518 Top 60 of 2017.

STEVE CANDLEN is a multi-talented Albany musician who has toured with Felix Caveliere’s Rascals and presently drums with Franklin Micare and folk artist Kevin McKell in addition to his steady diet of solo shows.

AVENUE A is a new pop-punk band.

THE TRADITION is an acoustic duo featuring Zach Leffler and Ralph Renna.