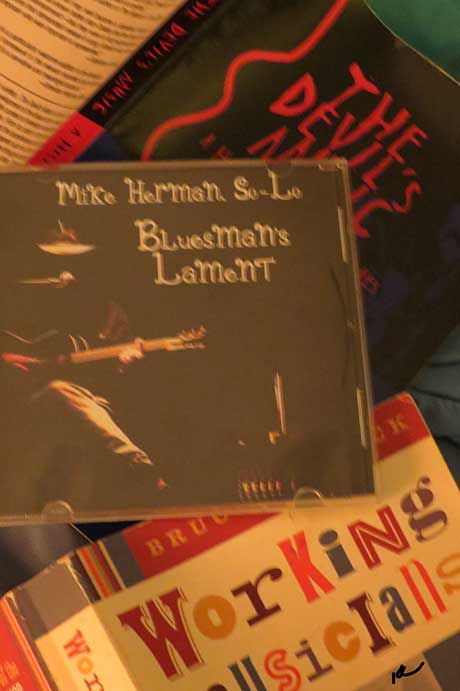 Review and photograph by Wanda Callagy

Mike Herman’s newest CD, Bluesman’s Lament, is full of rich, fun stories with a taste of the rich Catskill history around him. Full of his deft finger-picking style in these driving originals, he invites you in for a listen, again and again. Some local tales are shared in both “Back River Road Rag” and “Catskill Blue” – from the woman with raven hair near Fitch’s Bridge to local moonshine to adventures in the country backstops. And add some wild slide work and gritty guitar picking.

Soulful sounds begin when “Blues Are Movin’ In” adds Herman’s vocals with passion and energy. Then there’s some comic relief with “Been There and Done That,” a reminder of life’s ironies and how they become old hat. Highlighting the CD, fresh, yet haunting guitar riffs distinguish this tune from the rest as Bluesman’s Lament makes the listener want more. A goodbye ragtime parade is imagined with foot-tapping and dancing required as the soulful “Leave Here Feelin’ Good” is upbeat and true.

Herman opens and closes the album with instrumentals. To open, he introduces “Mountain Meltdown,” showcasing his style, leading you to more complicated licks. He wraps it up with ‘Good Ol’ Gal,” a mix of two (maybe three) guitar pieces, blending together and sharing his sound and adding to them both a significant dose of Roy BookBinder’s raw-edged string-snapping sound – a tune easily heard again and again.

The CD was produced in Catskill Mt. Studio by Jim Averna and Herman, with vocals,guitars and harmonica played by Herman and Frank Goronsky on shaker. Averna handled the vocal harmony arrangements, while Lorna Herman took care of the artwork on the CD itself.

You can catch Herman in person at 7pm tonight (Friday, July 6) at Friday at Indian Ladder Farms Cidery & Brewery in Altamont.