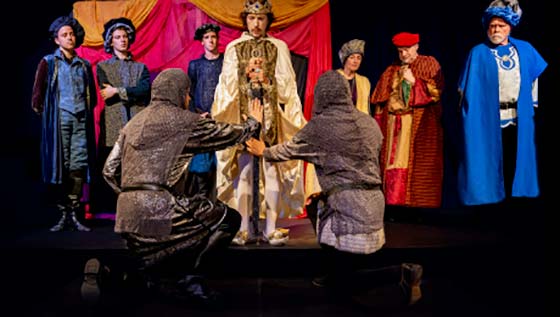 How is it possible for a local theater, performing in a school with a cast of 17, including a small group of experienced actors working alongside a number of young students, to mount a credible, fully-staged and costumed production of Shakespeare’s Richard II, a play written entirely in verse?

That is what Walking the dog Theater, celebrating its 21st anniversary this year, has happily achieved at Hawthorne Valley Waldorf School, under the direction of Melania Levitsky, with yeoman assistance from composer/music director Gotthard Killian, set designer Serena Hoffman and costumer Elizabeth Frishkoff (and assistants).

Written in 1595, the play takes place during the reign of Richard II (1377-99), an incompetent, self-centered, corrupt king, eventually deposed by his cousin, Henry Bolingbroke, whose property Richard seized after banishing him. Wallowing in self-pity as Bolingbroke amasses forces against him, Richard willingly hands over his crown. Why should we be interested in this weak king? Because, as Shakespeare scholar Harold Bloom suggests, Richard is a remarkable poet – a “master of metaphor” – whose lyrical passages become more eloquent as his position as God’s anointed ruler slips away. Upon learning that Bolingbroke has been murdering the king’s supporters, Richard speaks these famous lines:

Fortunately, David Anderson, Executive Artistic Director and a founder of Walking the dog Theater, plays the title character. His portrayal goes a long way towards explaining why Bloom thinks Richard would have been better off as an actor than a king. Anderson masterfully captures Richard’s many moods: his cruelty, insecurity and the manic-depression that propels him from wanting to defend his title, which he has held since childhood, to the realization that he is nothing.

Click to read the rest at Berkshire on Stage…