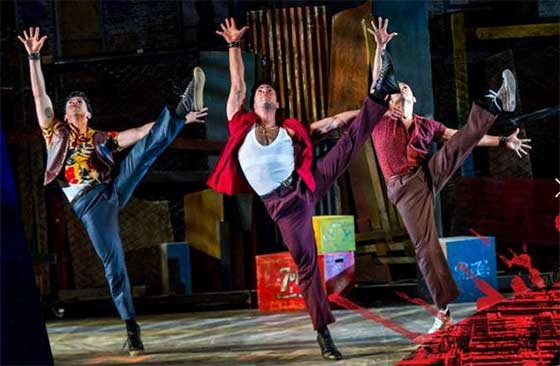 There was a moment at the beginning of the Barrington Stage Company production of West Side Story where Riff, the leader of the Jets gang, takes two short steps and then sort of lifts off – his bent leg rising to the side, his shoulders in a shrug. It looked effortless, and my heart lept as I watched it – I knew immediately that this show was going to be danced at the highest level.

The two gangs establish their identities in that first number: the Jets own the turf, and they slide, smoothly, their jumps soft and controlled. The Sharks, the interlopers, are more explosive yet wary, going from low strides to sudden high side kicks, then back to a crouch, looking over their shoulders. The menace, the threat of violence on either side that could boil and explode at any moment – somehow it felt very real at every moment.

The original Jerome Robbins choreography was meticulously recreated for this production by Robert La Fosse and Nicholas Barr, both of whom danced with Robbins extensively. The Mambo scene at the gym was thrilling, “America” was spectacular, and even the dream ballet during “There’s a Place for Us,” which has seemed absurd in other productions I’ve seen and is often cut, was lovely and heart-wrenching.