THEATER: “Men On Boats” Sails into Sand Lake Center for the Arts [Berkshire on Stage] 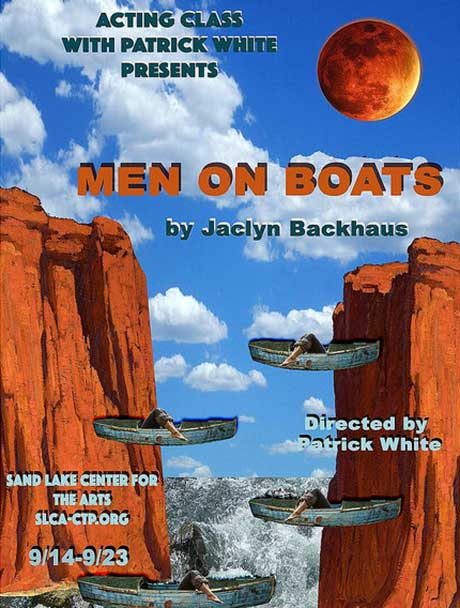 For six performances beginning tonight (Friday, September 14) at 8pm and running through Sunday, September 23, Sand Lake Center for the Arts in Averill Park will host the inaugural production of Acting Class with Patrick White’s students in the regional premiere of Men on Boats by Jaclyn Backhaus. The production will be directed by Patrick White and feature 12 of his students. Tickets are $15 and are available through SLCA’s website or by calling 518-674-2007.

Men on Boats is the critically acclaimed (New York Times Critic’s Pick, 2017 Outer Critic’s Circle Award nominee) adventure about the 1869 exploration and charting of the Colorado River by the one-armed Civil War major, John Wesley Powell, and his insane but loyal crew written to be played by a cast of women. “The characters of Men on Boats were historically cisgender white males. The cast should be made up entirely of people who are not” reads the playwright’s instructions on casting in the acting edition of the script.

The Powell expedition faced unknown waters, dangers and deprivations and struggled together to traverse the Big Canyon and make it safely down the river and through the Canyon in the face of rapids, capsizing, near-mutinies, rattlesnakes and rapidly depleting supplies. As Major Powell wrote in his journal, “The Exploration of the Colorado River and Its Canyons,” which the play is based on, “We have an unknown distance yet to run, an unknown river to explore. What falls there are, we know not; what rocks beset the channel, we know not; what walls ride over the river, we know not. Ah well! We may conjecture many things.” The play is an epic adventure of courage in taking on a momentous journey that had never been attempted before against great odds to benefit unseen generations to come.