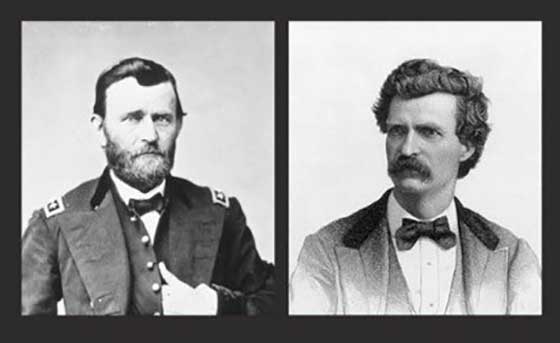 “All the planets seem to have aligned,” said playwright Elizabeth Diggs. “A new play in a new theater at a time when interest in President Grant is on the rise.”

The play is Grant & Twain, a little known story of how the lives of these two famous personalities of the late 1800s intersected. “Grant was bankrupted in a Wall Street swindle,” Diggs explained. “His only hope to save his honor and provide for his family was to write his memoirs of the war. Mark Twain idolized Grant, and when he heard the ‘standard’ offered from a prestigious New York publisher, he was infuriated. He rushed to Grant’s side to persuade him to go with his own new publishing house with an audacious plan to make Grant’s book the biggest seller in American history. Neither of them knew, at that time, that Grant was suffering from throat cancer. He ended up completing the manuscript three days before his death.” This all took place at “The Cottage,” now a national historic landmark just nine miles from Saratoga Springs. (Grant was offered free temporary housing there since he could no longer afford his NYC lodging.)

After working for dix years on this, Diggs’ 11th full-length play, one of her earliest readings was at a venue in Spencertown. Shortly after that, she was at a social event with Judy Grunberg, founder of PS21 in Chatham, a performance space that has been growing yearly, since its inception in 2006. “I told Judy about the play, its subject matter and the enthusiastic reception the readings had gotten,” Diggs explained. “She thought it would be the perfect choice as the first play to open the newly built black box theater at PS21 this September.”