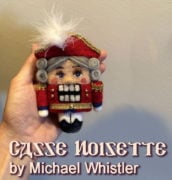 Catskill’s intimate Bridge Street Theatre will close out its 2018 season with a major coup: the world premiere of Philadelphia-based playwright Michael Whistler’s brilliant, funny, and touching Casse Noisette (The Nutcracker). The play, described by its author as “the story of a very quiet man and some very loud music,” masterfully interweaves the life of Russian composer Pyotr Ilyich Tchaikovsky with that of a deeply-closeted modern-day American high school teacher obsessed with Tchaikovsky’s music. Sugar plum fairies and phone sex workers collide, and five actors play eleven different roles in two completely different time periods, in this tale about discovering the strength to be true to one’s self, whatever the cost.

Pyotr Ilyich Tchaikovsky is a musical titan in late 19th-century Russia: hugely popular, incredibly charismatic, deeply emotional, mercurial, explosive. Tortured by his homosexuality, he finds release only in composing and in his love for the son of his invalid sister. Joe Jessup is a quiet, unassuming, and very private high school Earth Sciences teacher in suburban Washington state, a man who has long since resigned himself to not getting exactly what he might wish for out of life. For years, his only emotional outlet has been his love for the music of Tchaikovsky and, more recently, his furtive calls to a gay sex chatline – but merely to listen to the young man on the other end of the phone, never to speak himself. Actor Jason Guy, whom audiences may remember from his tour-de-force performance in Bridge Street’s 2017 world premiere of Kieron Barry’s The Official Adventures of Kieron and Jade, portrays both these characters as their worlds intertwine and each struggles to find some sort of fulfillment in his life.