Among the many landmark 50th anniversaries this year was the release of The Beatles’ only double-album with a plain white album jacket that has become known as The White Album. In retrospect, many consider this album marking the beginning of the end of the Fab Four.

To recreate this album in its entirety, bassist-bandleader Scott Petito assembled a large group of the Hudson Valley’s top musicians of multiple genres to present “The White Album: 50 Years” at Woodstock’s Bearsville Theater.

The tone was set before the concert by a brief background speech by legendary environmental activist, poet and musician Ed Sanders, who was very much a part of the counterculture scene at the time. He described the historic backdrop of the period, the assassinations of Martin Luther King and Bobby Kennedy, the war in Vietnam and the civil rights movement.

Then the concert started with the landmark sound of a jet plane taking off “Back in the USSR.” With the full band in gear and being propelled by multiple vocalists leading (The Beatles were mostly about their vocals), the music took us back to that time and place, Woodstock style. The album was played in sequential order with a brief break at the end of what would be side two (for those who remember vinyl) before continuing to sides three and four.

Multiple musicians shared vocal duties. The duet of Jules Shear and Joey Eppard, who have been heard on other Petito tribute projects, dominated the rockers. Vocal chores throughout the night were also handled by Leslie Ritter, Adrien Reju, Steven Taylor, Danny Blume and Peter Primamore.

The assembly of musicians was strewn across the stage with many guitarists, two keyboardists and a pair of drummers, as well as a string section.

The balance of the rockers and ballads was well performed by the ensemble, paying respect to the originals, but not trying to recreate them note for note. Everybody was having a good time.

Of course, the big question is, “Was ‘Revolution No. 9’ performed?” The answer is yes; the Stockhausen-influenced collage piece was played complete with the original lyrics, some sound effects and loops like it would have been played in the present day.

By the time the last tune, “Good Night” was performed, the audience and ensemble were one, grooving and dancing to the good vibes and memories. Although, the evening was cold and rainy, Bearsville Theater was a warm toasty place to be that evening.

Revolution #9 from Rudy Lu on Vimeo. 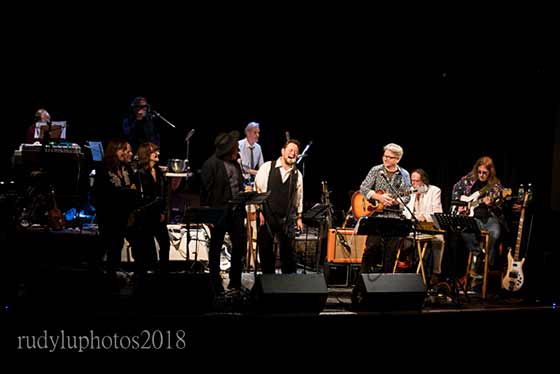