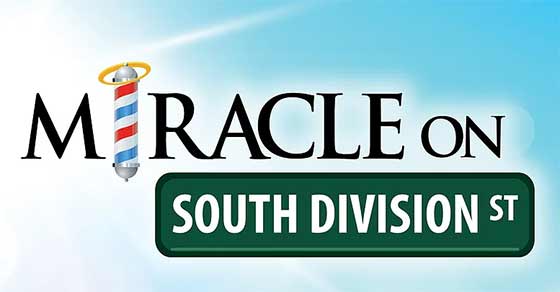 The Ghent Playhouse kicks off the second-half of its 2018-2019 season with the hilarious kitchen-sink family dramedy Miracle on South Division Street. This heartwarming fictional story by Tom Dudzick was inspired by a real Buffalo, NY barber who claimed the Virgin Mary appeared to him and thus erected a 20-foot-tall statue in the neighborhood. Directed by Cathy Lee-Visscher, Miracle on South Division Street runs from today (February 1) through Sunday, February 17. Tickets are on sale now.

“At the heart of this show is family. Even though we catch them in a turbulent moment, there is still a lot of love there. Just look at the show’s premise; one sister calls a family meeting, and everyone shows up,” explained actor Sam Reilly. “Even though they fight and get on each others nerves – they still show up for each other.”

Meg Dooley stars as Clara, who has converted the famed barber shop into a soup kitchen and religiously tends to the shrine that the neighborhood sees as a beacon of hope in the midst of Buffalo’s urban blight. Sam Reilly (as Jimmy) is a blue-collar guy with a secret of his own, and Christina Harrigan is Beverly, the frumpy eldest daughter. Sierra Lynch is Ruth, the middle child and an aspiring writer.