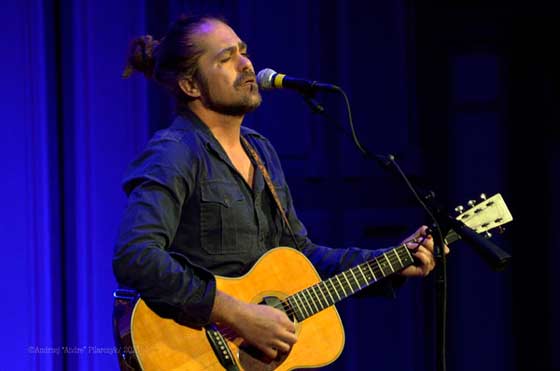 By Greg Haymes
Photograph of Citizen Cope by Andrzej Pilarczyk

Upstate Concert Hall will play host to a two-night stand of Taking Back Sunday’s 20 Year Anniversary Tour at 8pm on Saturday & Sunday, November 2 & 3. Tickets are $35. Also at UCH, Citizen Cope steps into the spotlight at 8pm on Friday, May 17. Tickets are $31 in advance; $36 at the door. Tickets for both new shows go on sale to the general public at 10am Friday (March 1).

The Linda welcomes John Primer & the Real Deal Blues Band on Friday, April 26, with Misty Blues opening the show at 8pm. Tickets are $25 in advance; $30 at the door. Also at The Linda, pianist Andy Iorio celebrates the release of his third solo album, Awakening, at 7pm on Friday, March 29. He’ll be joined by Tania Halko Susi on violin and Demetria Koninis on cello. Tickets are $25.

Cropseyville’s favorite revved-up rockabilly band Rocky Velvet is reuniting to headline at the Hangar on the Hudson on Friday, April 5, sharing the stage with Surfer Joe. Showtime is 8pm; tickets are $15.

IN CASE YOU MISSED IT: Veteran guitar hero Peter Frampton is bringing his farewell tour to The Saratoga Performing Arts Center with Jason Bonham’s Led Zeppelin Evening. Tickets go on sale to the general public at 10am Friday (March 1).

IN CASE YOU MISSED IT: In conjunction with her art installation, “Now I Let You Go,” Annie Lennox will perform “An Afternoon of Conversation and Song with Annie Lennox” at MASS MoCA’s Hunter Center in North Adams.

IN CASE YOU MISSED IT: Korn roars into the Saratoga Performing Arts Center this summer on a co-headlining tour with Alice in Chains. Also on the bill are Underoath and Ho99o9. Tickets go on sale at 10am Friday (March 1).

Mardi Gras is Tuesday, but Grammy Award-wining accordionist-singer Terrance Simien keeps pummping out authentic zydeco music at 7pm on Wednesday (March 6) for a Mardi Gras dinner party at the Rivers Casino & Resort in Schenectady. Tickets are $30, including a Louisiana dinner with King Cake for desert.

Levon Helm Studios in Woodstock will play host to the Garcia Project with special guest Maria Muldaur performing a full, classic Jerry Garcia Band set list at 8pm on Saturday, May 4. Priced at $30 & $50, tickets go on sale at 11am Friday (March 1). Also upcoming is a concert by Parquet Courts in support of their new album, Wide Awake!, at 8pm on Friday, June 7. Priced at $30 & $45, tickets go on sale to the general public at 10am Friday.

IN CASE YOU MISSED IT: Cross-genre violinist Daniel D and his band take the stage at the Troy Savings Bank Music Hall next month.

The New Orleans-based singer-songwriter-guitarslinger Eric Lindell rolls into the Parish Public House in Albany at 9pm on Wednesday, March 20. Tickets are $20.

IN CASE YOU MISSED IT: The hot new boy band Why Don’t We is slated to make their Greater Nippertown concert debut at the Palace Theatre.

At Bridge Street Theatre in Catskill, Charles Busch stars as Lucille Ball in a gala benefit concert staging of Lee Tannen’s I Loved Lucy, also starring Tannen as himself. Directed by Carl Andress, a performance will take place at 7:30pm on Friday, March 22 ($50), followed by the gala performance (including a catered reception) at 6:30pm on Saturday, March 23 ($100).

IN CASE YOU MISSED IT: The Egg has announced two new shows – stand-up comedian Kevin James and Prince tribute band Purple Reign. Tickets for both shows go on sale to the general public on Friday (March 1).

IN CASE YOU MISSED IT: The Australian Pink Floyd Show is headed into Saratoga Performing Arts Center this summer. Tickets go on sale to the general public at 10am Friday (March 1).

In support of their debut album, Thrilled to Be Here (due out in April on Fantasy Records), NYC band Bailen – featuring fraternal twins Daniel (vocals/bass/synth/guitar), David (vocals/drums) and younger sister Julia Bailen (vocals/guitar) – sweeps through Greater Nippertown, with shows scheduled for BSP Kingston in Kingston on Thursday, April 4 ($10 in advance; $12 at the door); the Hangar on the Hudson in Troy on Wednesday, April 17 ($9.77); and the Parlor Room in Northampton on Friday, April 19 ($10 in advance; $13 at the door).

IN CASE YOU MISSED IT: Veteran stand-up comedian Brian Regan has been booked into the Ulster Performing Arts Center in Kingston. Tickets go on sale to the general public at 11am Thursday (February 28).

Rev Tor & Friends pay tribute to the music of Santana in concert at the Colonial Theatre in Pittsfield at 8pm Friday, May 10.Tickets are $25.

CANCELLED: Chris Difford of Squeeze was slated for an appearance at Colony in Woodstock on Friday, March 8, but that performance has now been cancelled.

FEST: The Back Porch Festival in Northampton