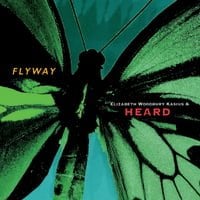 The American experimental psychologist, Edwin Boring, did pioneering research in perceptual ambiguity. Look at the picture, and see a vase, or see the profile of two faces looking at each other.

I think of perceptual ambiguity when listening to Flyway, the new album by Troy’s Elizabeth Woodbury Kasius & Heard.

But, under more scrutiny, the palatableness can’t mask its brilliance.

Music to tap your toes to, yes. To dance to, ditto. But a serious listen will also provide other rewards.

Eventually, you hear more than the obvious — not a surprise when you consider the musical pedigree of the prime composer of the works on this CD and those in her group.

While grasping at efforts to describe it, I saw CD Baby filed Flyway under “world fusion,” reasonably apt because of the presence of West African drummer Zorkie Nelson and Kasius’s own passion for Brazilian music. Then there is percussionist Brian Melick, whose own creations reflect a commitment to musical ecumenicalism.

But it is composer Elizabeth Woodbury Kasius’ own musical influences that I most hear.

She is pianist, yes, but also an ethnomusicologist who studied with a Brazilian pianist, a Nigerian Juju musician and trombonist Julian Priester, an alumni of Sun Ra’s Intergalactic Arkestra. The same Sun Ra who hailed from Saturn and produced otherworldly music.

Kasius has what musicians refer to as “big ears,” not in the anatomical sense, but as in listening to and absorbing the music of the world and then weaving it into her own creations.

Not sure that my ears are big enough to hear all the influences of Flyway or the multiplicity of voices and instruments (see list below) — some of which I am only dimly aware of — that have a comfortable presence in Kasius’ music. Most striking, perhaps, is the vast number of percussion instruments heard. They range from the
Brazilian surdo to the Nigerian udu and Tibetan prayer bells. Trinidadian steel pans accompany a children’s choir on the song “Mama Bukom” by Nelson, and there are layers of voices throughout the album.

While the instruments and voices — and the textures they produce — are numerous, the music is never chaotic or overwhelming, but clear and evocative.

It works like a Rorschach test for me. The first cut, for example — “Market Song” — brings to mind some of the jumpy tunes of the Microscopic Septet and the smart compositions of Joel Forrester. With the woodwinds of Jonathan Greene, I am reminded of Tin Hat and even the German acoustic group Quadro Nuevo. The smart, clear bass work of Bobby Kendall provides a steady, comfortable anchor to the music, bringing me to jazz, pure and simple. And the voices make me think of Return to Forever and the Brazilian singer Flora Purim. Return to Forever, founded in 1972 by Chick Corea, was among the first “jazz fusion” bands, and it was among the first crossover groups — along with Weather Report and the Mahavishnu Orchestra — to introduce jazz to a new audience.

With Flyway, Kasius & Heard is also opening doors to new worlds of music. Highly recommended as a gift to anyone who wants to open ears.

Storm Is Headed for Schenectady