And if Brucker had emulated his band mates’ skinny-on-the-sides/standing-lush-on-top hairstyles, Weisse could have dubbed them the Swinging Mohawks. But I digress.

A nervy move: they started with a Carey original, swinging the mid-tempo “I Thought You Were Happy to See Me,” settling right away into a dynamic trio process they varied some but mainly held strong through 96 minutes in the welcome shade of the Jazz on Jay tent. As usual, everybody’s charts blew off everybody’s stands, but that was the only possible complaint about the weather.

Right out of the box, Carey dug into the melodies while Monkell Jaco’ed in restless rhythmic push and Brucker as usual Gibraltar’ed the beat. Carey carried the first solo, usually, and the trio had a tight cohesion. They sometimes stated the theme together, Carey exploring the chords next while Monkell taffy-pulled the beat; then as Monkell took the lead, Carey stayed right with him while Brucker stayed with everything. Monkell and Carey both played lots of notes, often in rapid rushes, yet Brucker set the throttle. They seldom strayed far outside, and always came back to the song from wherever they took it.

Joshua Redman’s blithe “Soul Dance” flowed from a subdued but strongly syncopated reverie, then grew into imposing McCoy Tyner-like cascades. Bob Reynolds’s “Down South” supplied their first funky foray with the hot heft of a slow-drag dance. It seemed at first to be all about the beat, but had plenty going on harmonically, too, a great groove with smarts.

Noting the next tune was the first he’d learned to jazz up under pianist Dave Gleason’s tutelage, Carey started Henry Mancini’s “Days of Wine and Roses” as a cheerful waltz, but the beat gradually took over this one, Brucker and Carey swapping fours after Monkell’s busy solo.

Introducing the next original as “something completely different,” Monty Python-style, Carey soothed his “Notions” quietly and all alone before bass and drums ganged up on it. They built this meditative serenade into a rocking chaconne, emphatic repeats surging in waves before everybody subsided back to the head. Carey promised a twist on Herbie Hancock’s “Dolphin Dance,” but this bouncy mid-tempo standard flowed with a familiar charm.

More surprising was John Mayer’s – yeah, him – “Stop This Train,” spring-boarding from a pop-song structure into a driving, melodic repeating statement reminiscent of Christopher O’Riley playing Radiohead. In this surprising stir-and-scramble-the-influences section, Carey respectfully echoed Chick Corea in “Tones for Joan’s Bones.” (Sorry, I pranked everybody in my SPAC jazz festival review as “Tones for Joan’s Phone”…) But Carey soon sparked the melody with Tyner-like pulsating chords.

Similarly, “Someday My Prince Will Come” soon departed from an early exposed piano waltz into a hard-hitting romp: romantic optimism as contact sport. This surfed on a dynamic finish of hot swaps, Brucker’s drums with linked piano and bass.

After taping everybody’s charts to their stands, Carey ripped into Billy Childs’s jagged “Backwards Bop,” another exciting chase with everybody crossing the finish line together after a bold exchange; drums one-upping bass and drums, then vice versa.

To close, Carey chose another pop-to-jazz jump, proving Wulfpeck’s “It Gets Funkier” to be thrillingly prophetic. This thing churned and burned, a hot finish to a hot show on a hot afternoon.

COMING UP: Trumpeter Dylan Canterbury leads his Quintet at Jazz on Jay next Thursday (July 21) at noon. Free. Rain site: Robb Alley at Proctors, next to Apostrophe. 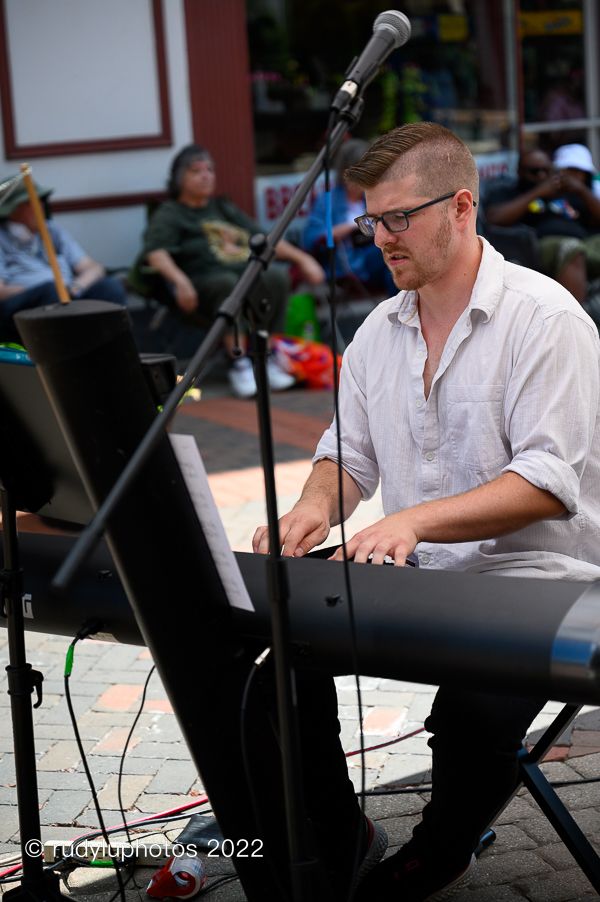 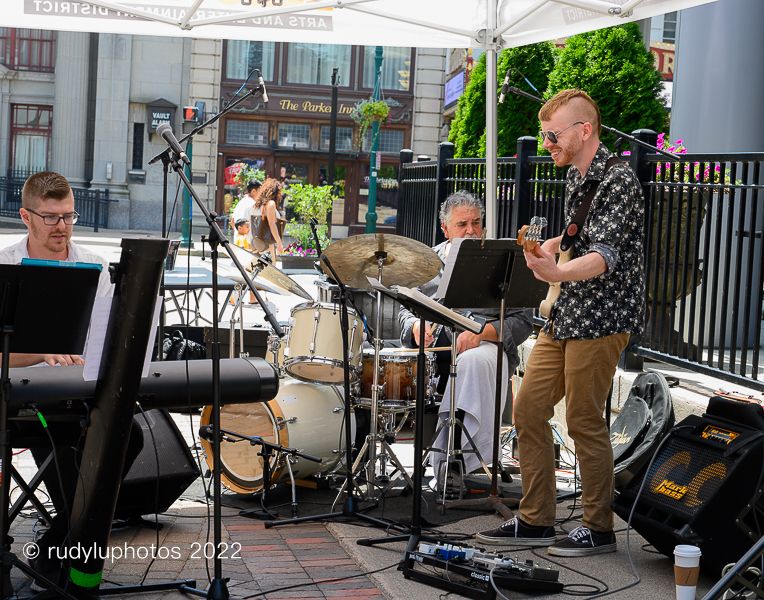 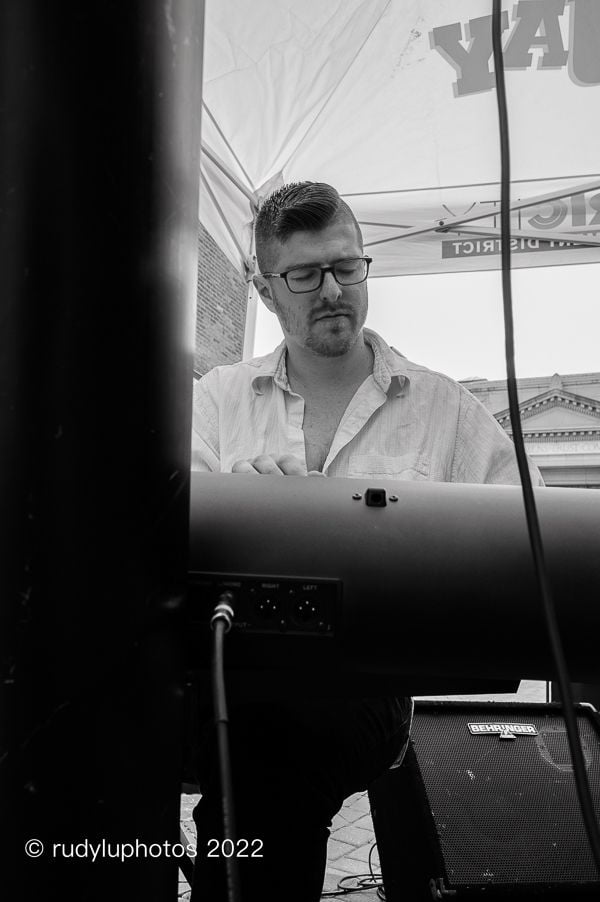 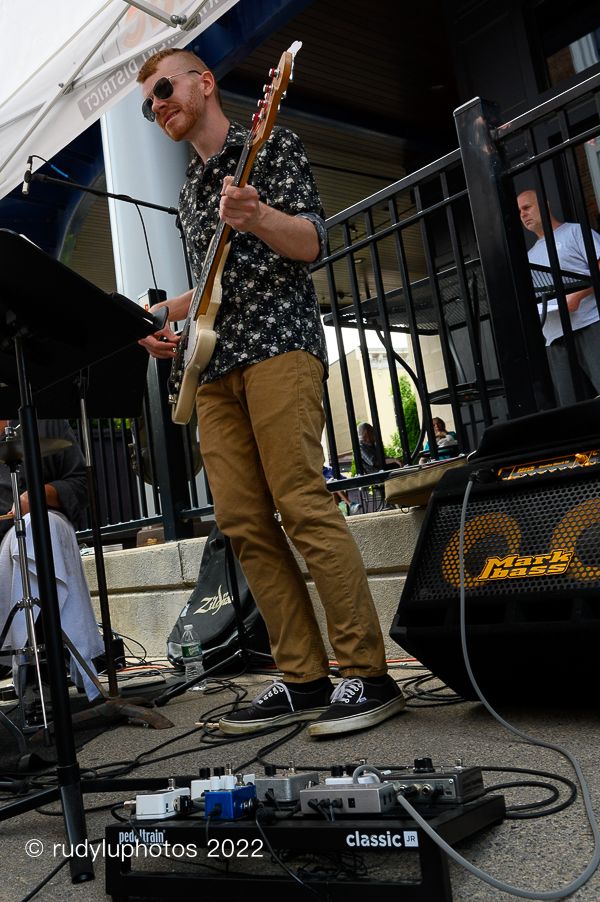 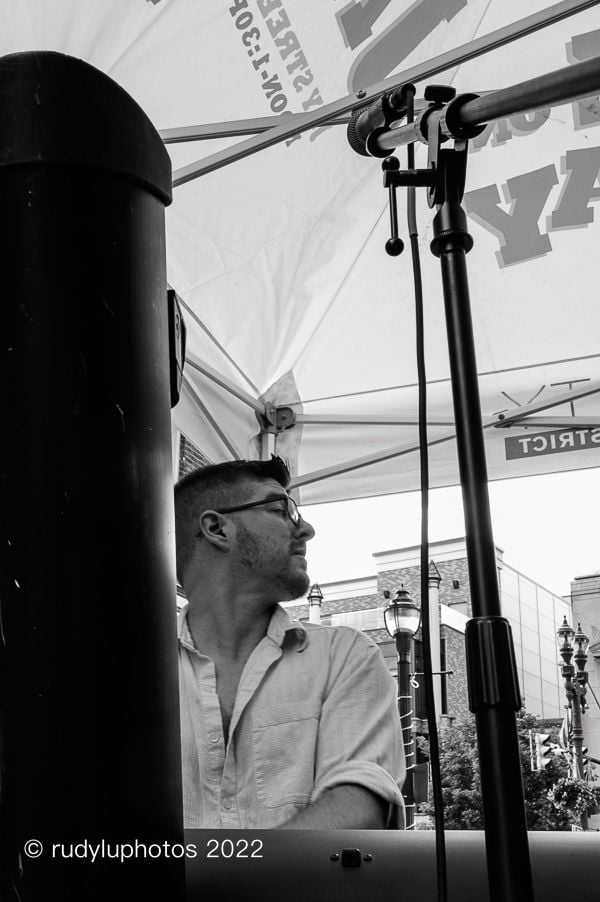 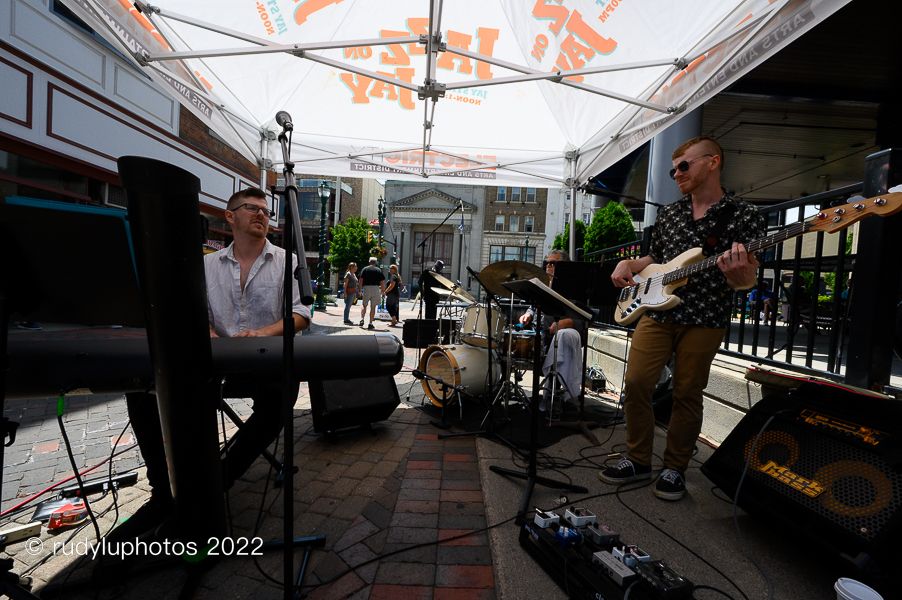 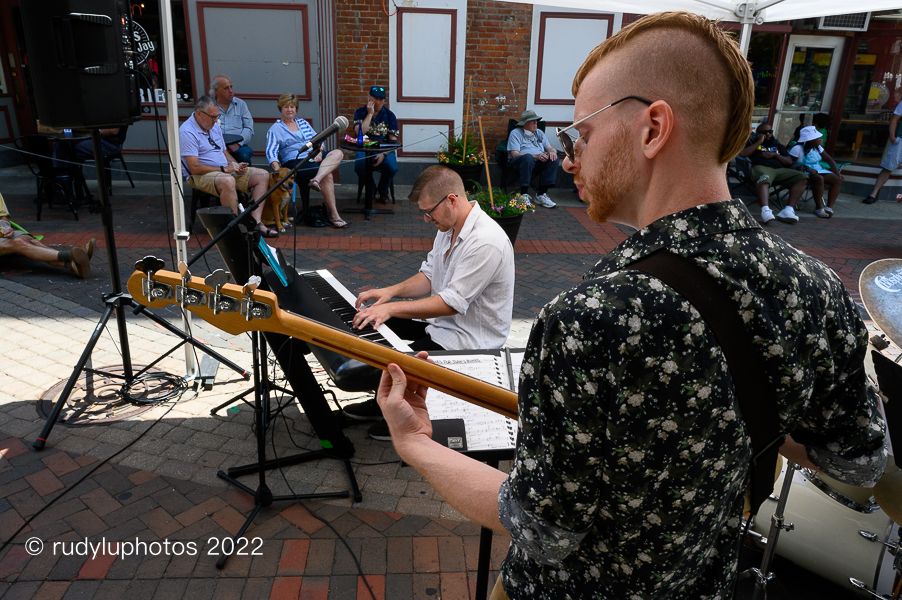 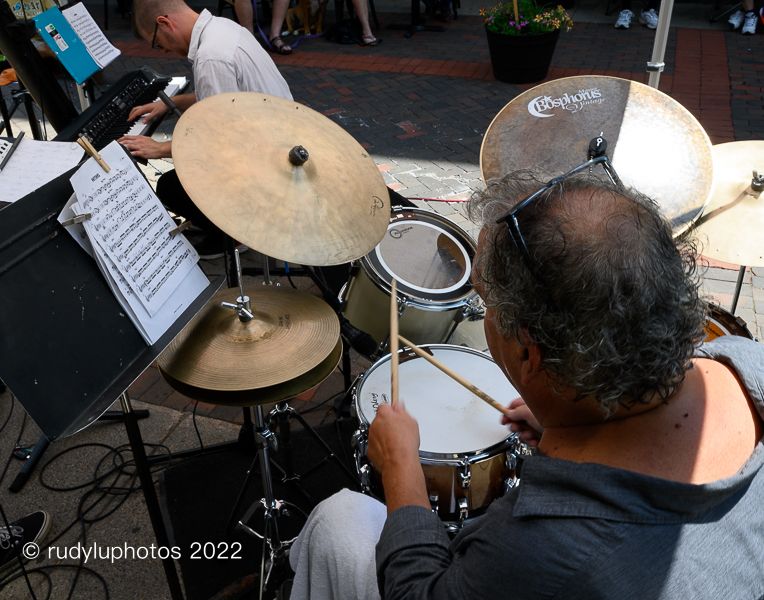 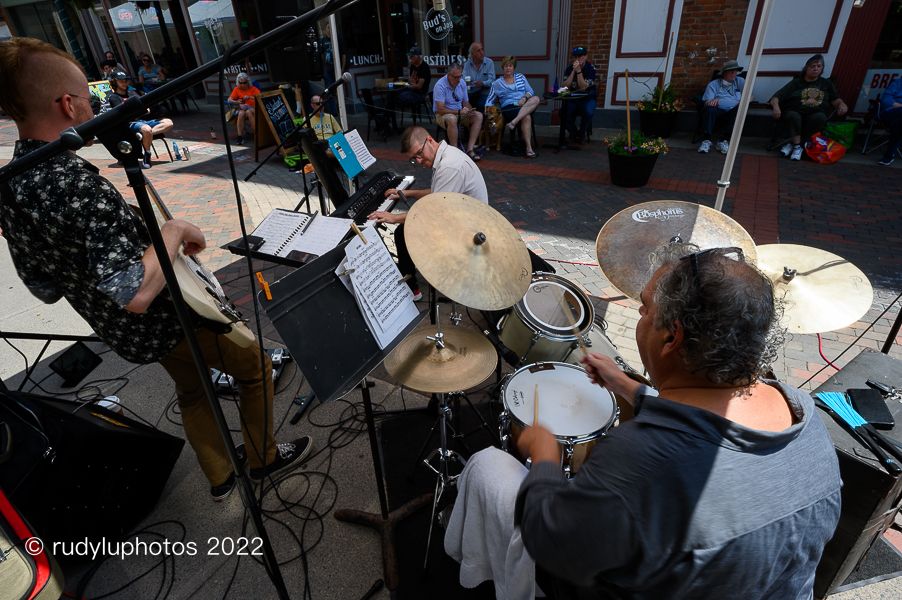 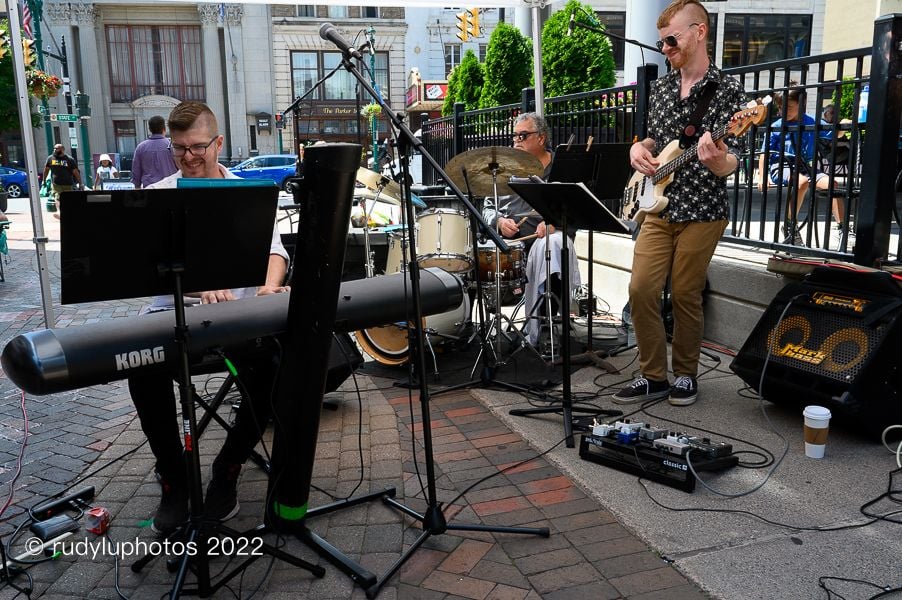 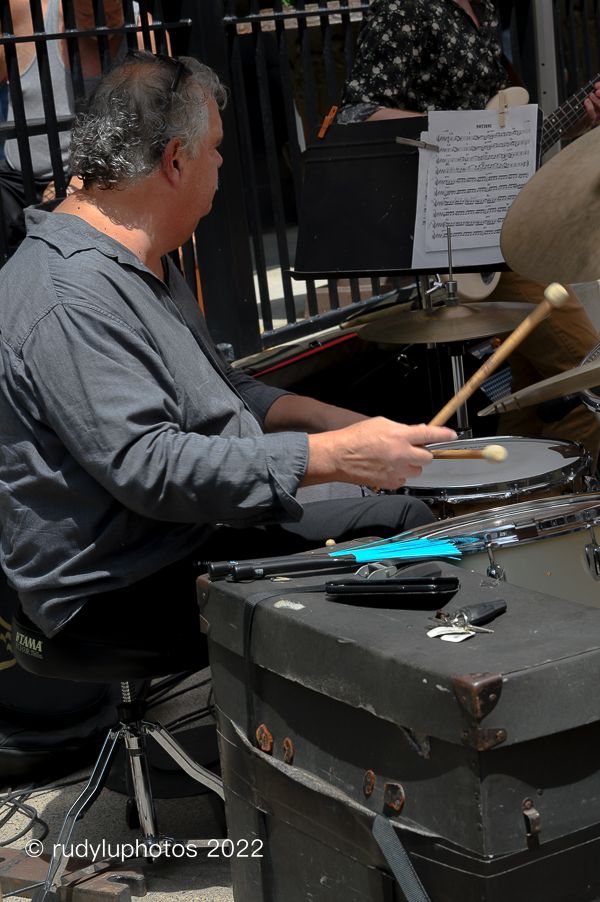 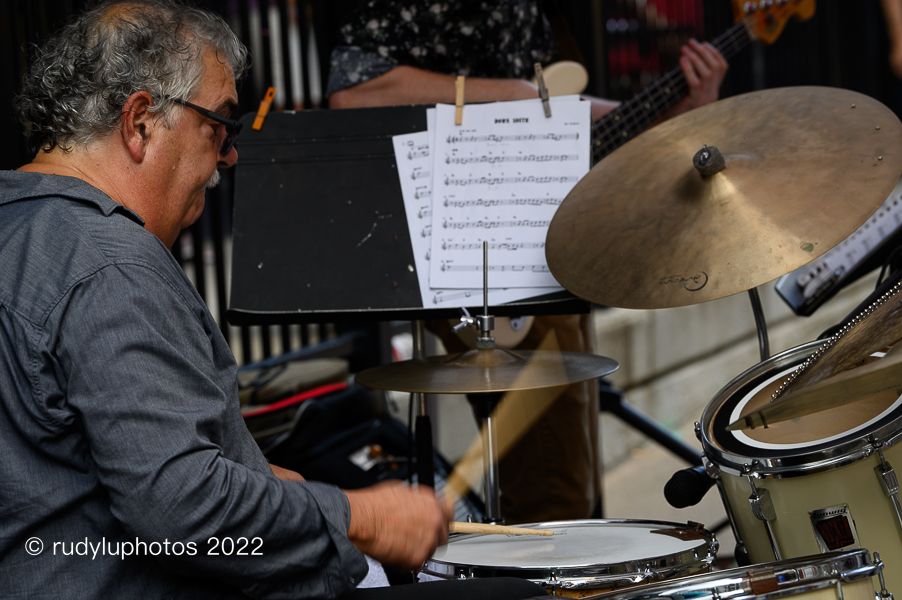 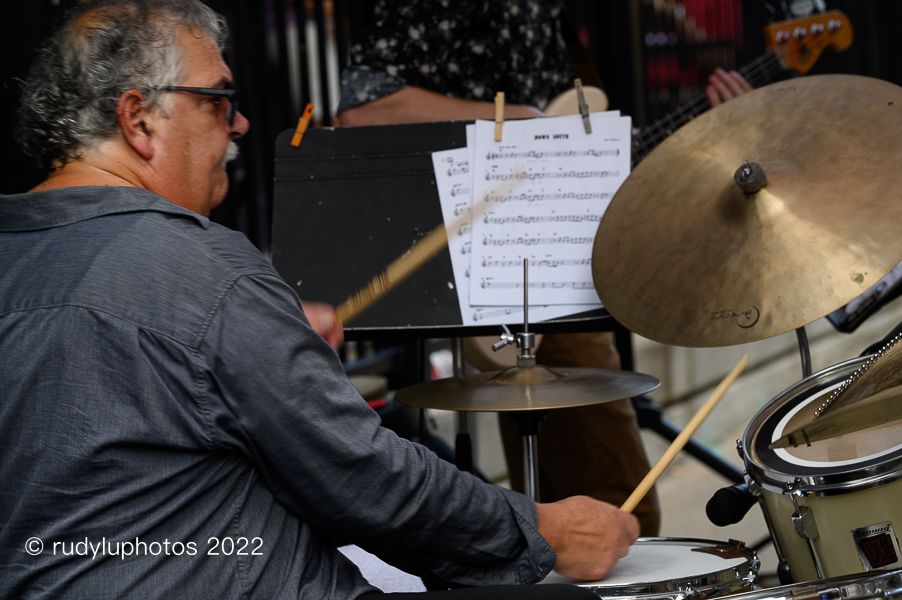